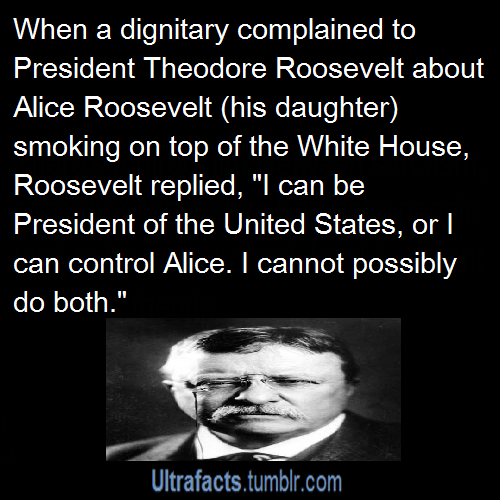 ALICE ROOSEVELT WAS HARDCORE. “She was known as a rule-breaker in an era when women were under great pressure to conform. The American public noticed many of her exploits. She smoked cigarettes in public, swore at officials, rode in cars with men, stayed out late partying, kept a pet snake named Emily Spinach (Emily as in her spinster aunt and Spinach for its green color) in the White House, and was seen placing bets with a bookie. 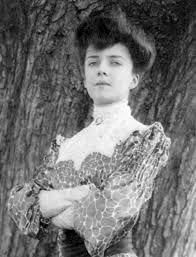 So what I’m reading here is, she was a Roosevelt?

Well I have a new hero.

Her whole wikipedia article is gold

“When her father was governor of New York, he and his wife proposed that Alice attend a conservative school for girls in New York City. Pulling out all the stops, Alice wrote, ‘If you send me I will humiliate you. I will do something that will shame you. I tell you I will.’”

“Her father took office in 1901 following the assassination of President William McKinley, Jr. in Buffalo (an event that she greeted with "sheer rapture.”)“

“During the cruise to Japan, Alice jumped into the ship’s pool fully clothed, and coaxed a congressman to join her in the water. (Years later Bobby Kennedy would chide her about the incident, saying it was outrageous for the time, to which the by-then-octogenarian Alice replied that it would only have been outrageous had she removed her clothes.”

“When it came time for the Roosevelt family to move out of the White House, Alice buried a Voodoo doll of the new First Lady, Nellie Taft, in the front yard.”

“Later, the Taft White House banned her from her former residence—the first but not the last administration to do so. During Woodrow Wilson’s administration (from which she was banned in 1916 for a bawdy joke at Wilson’s expense)…”

“As an example of her attitudes on race, in 1965 her African-American chauffeur and one of her best friends, Turner, was driving Alice to an appointment. During the trip, he pulled out in front of a taxi, and the driver got out and demanded to know of him, "What do you think you’re doing, you black bastard?” Turner took the insult calmly, but Alice did not and told the taxi driver, “He’s taking me to my destination, you white son of a bitch!”

“To Senator Joseph McCarthy, who had jokingly remarked at a party “Here’s my blind date. I am going to call you Alice”, she sarcastically said “Senator McCarthy, you are not going to call me Alice. The trashman and the policeman on my block call me Alice, but you may not.”